Eat it or you'll die

A little something about our son. More stuff from GTA V coming maybe in a later post.

When you have a child, you really want him to survive. That's a basic instinct, right? Then why does the feeling come out so negative when he's not eating? I've been stressing out lately with the fact that our 3 year old son doesn't eat that well when he's home. Well, if we'd give him only bread, then sure, he'd eat nothing but that! But a home cooked dinner apparently is never a good thing. And when he doesn't eat, I sometimes get really upset. I even get some really aggressive thoughts, that don't make any sense.

I just have to accept the fact that he'll eat when he's hungry, and stop stressing out. Maybe he actually doesn't even know what a real hunger means, in our perfect society when there's always food available? My wife was talking about the third world countries, that because they don't have enough food to become fat and lazy, they have a better survival instinct and the smaller children probably don't have any trouble eating whatever.

Our son was complaining a stomach ache earlier, could it be that it was just hunger, but because he hasn't felt it that much, the instincts to eat have maybe dulled? I think that it's a thing that's hardwired to a human from birth.

Oh well, the situation will fix itself in time. I'm not going to starve our son on purpose!‎

I'm not sure how to explain it. I am a very "jumpy" person with the things I have a great interest in, how I want to spend my time with games and my free time. First I was highly addicted to Pokemon, I played through Platinum and didn't touch anything during that time. After that I didn't know what to do with my free time and spent my time on the computer looking at my Steam games list not being able to decide what to play. I think it was after that when I started to play Fire Emblem: Awakening, after that there was a lull and then came Animal Crossing. Now that the Animal Crossing addiction has faded away and it's been almost a week since I last visited my town I have been carefully thinking about something else. And that something else is Grand Theft Auto 5. 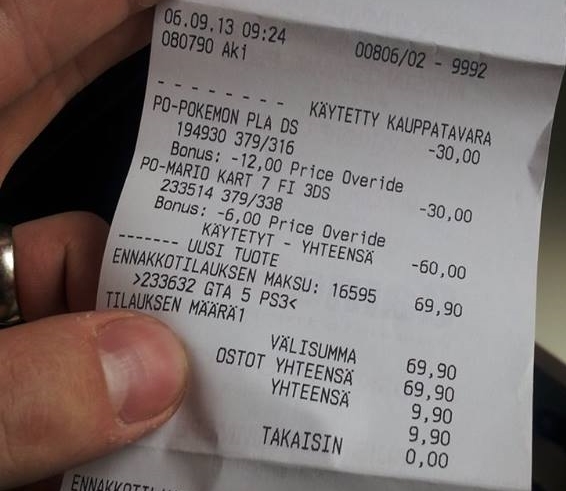 Just a week ago I wasn't even that hyped about the game. Then there started to be a little more talk about it, and next thing I knew I was trading Pokemon Platinum and Mario Kart 7 for GTAV at a local Gamestop. The past few days I've been furiously looking at stuff related to Grand Theft Auto, the Gametrailers Retrospective was great, and I've been looking at every video that typicalgamer has posted on Youtube. I've been trying to search leaks about the game but there haven't been any luck on that front. I don't want to spoil the story of the game, I've just been trying to look anything related to game mechanics. Only thing I found was a leaked achievement list that looked...nothing out of the ordinary. But still it made me wish more that I'd have the game already...

I was thinking about a good topic for a GTA V related post, and I thought I'd give my TOP-5 things I'm waiting about the game.

One of the new features of the game is the possibility to control 3 different characters, and even as you are walking with one character on the other side of the map, you can transfer instantly to see what the other characters are doing. This is a very interesting gameplay mechanic, and I'm eager to see more about it.

4. Story and the missions

The missions in previous GTA's have been really good, usually after a slow start. I'm hoping to see a lot of references to pop-culture in the game, although not as "in-your-face" as Saint's Row does it. When it comes to games, I'm truly an explorer. Nothing better than getting in your car or horse and driving off, never knowing what will come ahead. There wasn't much exploring in GTA IV, why the game wasn't that exciting.

I've always loved online gaming. MMO's somehow don't get a grip on me, I always get bored quite quickly (SWTOR was an exception), but nevertheless, I do love online gaming. And I've also been quite socially active on the internet, at least at the Pelaajaboard forums, and I like to play games with other people. This is truly the thing I'm waiting for most, as while it's fun to drive a car off a cliff, it's more fun to do it with a friend.

Sorry for the short explanations, I really have to go to sleep now.